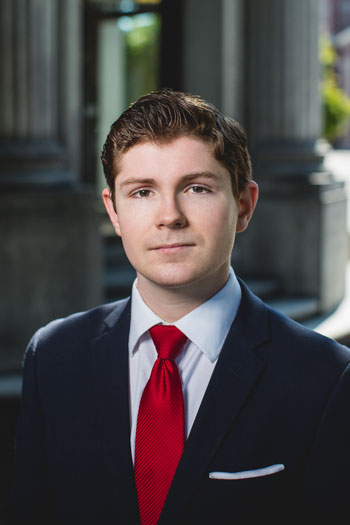 Ted is a Strategic Consultant with Merrimack Potomac + Charles. Ted most recently served as Executive Director at College Republican National Committee, one of the nations top ten largest 527-political committees, developing messaging and outreach strategies to bring millennial voters into the Republican Party. Ted also served as President of CRNC-Action, a 501(c)4 social welfare organization devoted to educating millennials on the ideas of limited government, where he worked with Kid Rock managing the Kid Rock for U.S. Senate Voter Registration efforts. Previously, he served as an Account Manager at Purple Strategies New England, overseeing a wide-range of government relations and public affairs campaigns for clients in the healthcare, energy, and tourism industries.

Ted’s experience is rooted in a range of political campaigns, having worked on a number of campaigns across New England. In 2012, he managed a Republican State Senate campaign in Massachusetts before going on to work as an Associate at Stinson Strategies, developing direct mail campaigns and overseeing campaign strategy for several Republican state and congressional races across Massachusetts. In 2013, he worked with the Dan Winslow for U.S. Senate campaign before going on to manage a winning special election campaign for Massachusetts State Representative in a competitive three-way race.  In 2016, Ted worked as a communications consultant for New Hampshire Governor Chris Sununu's campaign, developing and implementing digital and media strategies for the campaign.

Originally from Holliston, Massachusetts, Ted is a graduate of Boston College. He now resides on Massachusetts' North Shore with his wife Nicole and their puppy, Kennedy.